Ghost of Tech-mas Past: 3 Timeless Skills You Need to be Successful in the IT Industry Today

You are here:
Blog 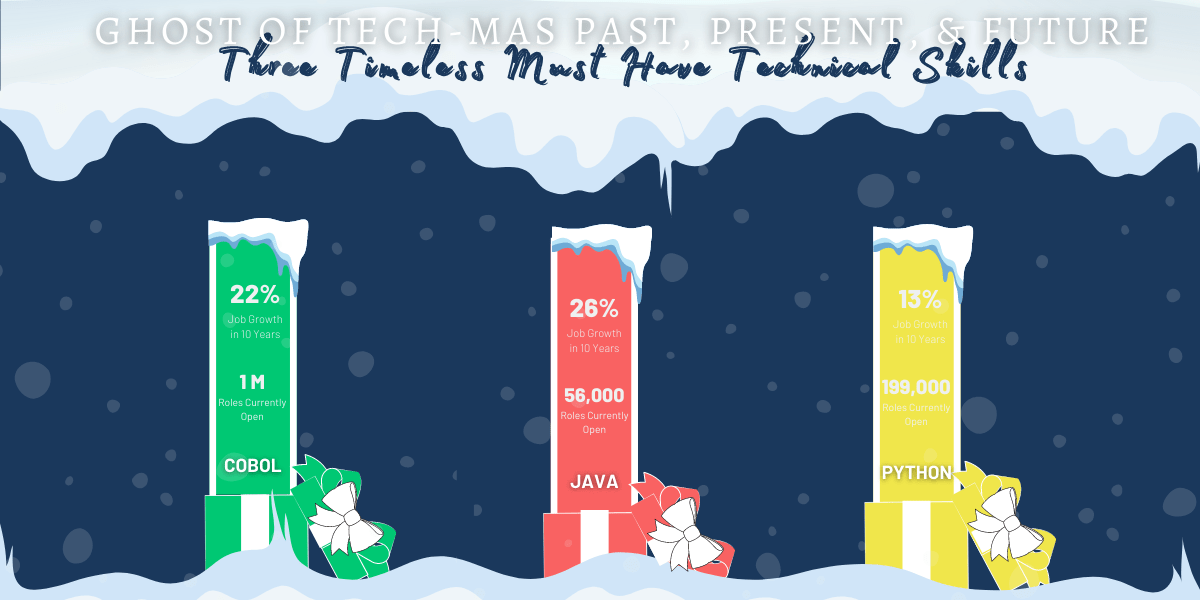 Trying to get in a technology field but confused about which skillset to pick up? Don’t worry – GenSpark has you covered! We’ll make sure you stay in the Tech-mas spirit this year!

Hard skills are those you not only need to master, but also have experience in. Unlike those natural soft skills, like communication or time management, hard skills need to be taught, evaluated, and measured.

Technical skills help you to perform practical tasks related to programming languages, design programs, mechanical equipment and tools. Throughout the history of IT, some skills like COBOL or Java, have lived on longer than others, and will aid anyone looking to break into the IT field. The IT workforce is consistently growing and knowing which skills to become well-versed in is a must for success.

So, before giving up on all thing’s IT, enjoy a visit from GenSpark’s ghosts of tech-mas past, present, and future! And like Ebenezer Scrooge, you may have a change of heart, or at least a change in career path! Your future awaits, continue reading below:

Learn from the Past with COBOL

“I thought COBOL was dead”

Not at all! COBOL is one of the oldest programming languages and it’s still in use today. While it’s not number one in the world, 60 years later and employers still see its value. COBOL stands for Common Business Oriented Language. It’s known for building business systems for popular companies like UPS, Cigna, and even banks.

How is it still relevant you may ask? Well in short it’s reliable. Companies, especially banks, need complete accuracy. And COBOL just gets the job done. To learn COBOL means to learn a large chunk of computing history which includes:

With COBOL being around for years that means so have its employees. Many COBOL experts are starting to retire thus creating room for a new generation to maintain these COBOL based systems.

Like that one scarf you won’t give up, COBOL is an oldie but goodie. It’s not flashy or new, but it ensures billions of dollars of data like medical records, are where they need to be when you need to retrieve them.

Get with the Times Using Java

Some things never die, and Java is proving immortal! Created in 1995, many predicted Java wouldn’t stand the test of time. However almost two decades later, Java is amongst the most popular programming languages in the world, running on about 3 billion devices worldwide.

So, what is Java actually? Well, Java can be found in our everyday lives. From car navigation systems to gaming consoles, Java is used to build a lot of these everyday applications and platforms. In fancy terms, Java is the programming language used to develop desktop and mobile applications, big data processing, embedded systems, and more.

It’s safe to say with Java in your skillset there’s an IT job waiting for you – and your friends, and your cousins, and even that one annoying neighbor. You get the point. Java is in & here to stay!

Prepare for the Future with Python

Experts are banking on python because it’s the most versatile programming language to date. With its simplified syntax and emphasis on natural language, Python is easy to learn and use, which makes its faster than other programming languages. Because of its versatility, Python can be used to build things both new and old.

Python doesn’t restrict developers which makes it the programming language of the future.

You’ve been visited by the ghosts of tech-mas past, present, and future so what’s next? How can you adopt these skills? Well, we don’t like to brag, but here it is:

GenSpark pays you to learn! All the above skills are available in our 8-to-12-week cohorts. Once accepted into the GenSpark program, our instructors not only train you, but they also provide interview prep, and much more. Afterwards, we help you get placed with a Fortune 500 company, and thus the IT workforce is yours to tackle. So, apply to spark your future today!

Not sure if GenSpark is for you? Our success stories speak for themselves! Help us recast the IT workforce by helping yourself learn a new skill.

I have a Computer Science Degree. Why Do I Need GenSpark?
November 7, 2022

Career Development: 5 Keys to Having a Good Technical Resume
August 10, 2022

Everything You Need to Know about GenSpark’s Promissory Note
July 14, 2022